Last weekend we went to Trieste (Italy) to take part to an international show on Saturday and a clubshow on Sunday. Berry was very successful ,on both days:

Saturday under judge K. Agnes from Izrael, he won the intermediate class with exc. and the judge gave him CAC and CACIB !!! What made me proud is how the judge described him in two world which says everything: POWERFUL AND ELEGANT !!! This is the quintessence of a ridgeback, isn’t it?

On Sunday under the italian judge Franco Ferrari we won the intermediate class of the clubshow,with exc. and later Berry got also the CAC (as you know in Italy only one dog can get a CAC, that dog was Berry  BOTH DAYS !!!!)

Soooo…. we cannot be more HAPPY and PROUD of our young boy who’s really doing fantastic . 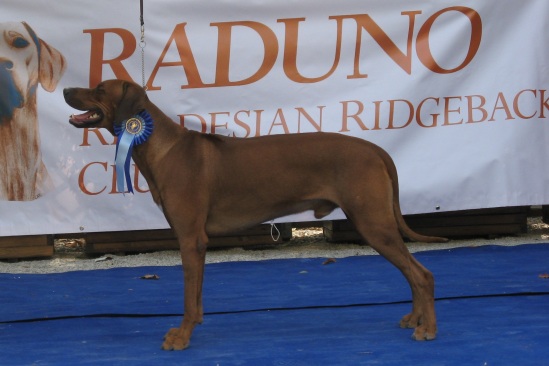 2 responses to “BERRY OPENED THE ITALIAN CHAMPIONSHIP AND GOT HIS SECOND CACIB !!”