D locus  Result: genotype D/D Interpretation: The dog is a noncarrier of the dilute gene  that is
responsible for the intensity of the coat colour.
The dog can not pass this mutation onto its offspring.

DM (Degenerative Myelopathy) –  result: genotype N/N, interpretation: the dog is homozygous normal concerning the intact SOD1-gene. The dog does not carry the mutation in SOD1 that is suggested to be a major risk factor for the development of Degenerative Myelopathy. The dog can pass only the normal gene on to all its offspring

haemophilia B (factor IX) –  Result: genotype female: X(N)/(X)N genotype male: X(N)Y , interpretation: the analyzed dog is homozygous normal concerning the intact gene. It is a noncarrier of the defect gene (X- chromosomal inherited factor IX deficiency resulting in haemophilia B). This dog cannot pass the mutation onto its offspring.

Berry is an extraordinary dog, very intelligent, he learns very quickly, I would say immediately (I never had to show him a command twice!) very sensitive towards humans, very tolerant with other dogs, very curious about life, a dignified and loyal companion, always ready to cooperate with humans in any activities you have in mind, he loves swimming, running wild, chasing birds, climbing, but also sleeping on a couch near to his human pack who by the way he ADORES. He has such a solar and happy nature, always ready to make fun of himself and of course of you…he knows exactly when is play-time, or show-time, or relax-time! He loves jumping in the car because he knows we’re going somewhere where something nice is going to happen. He is also very respectful of us (I guess he knows we are the pack leader!) and acts very gently and polite during the mealtime (he never showed growling or anything similar when we touch his bowl of food, or even if we took a bone away from him).

He never showed any aggression towards people, just happiness and a little bit too much exuberance (when he was younger). With other dogs he is always ready to introduce himself politely and then start the chasing game where he always wins !

The only situation when he shows stubbornness is when he finds food by himself during the walking in the woods, and he knows we do not want him to eat anything from the ground… then he is very reluctant in giving up the food he found, and we have to be very firm about that !

With Berry we never used harsh methods of training, just positive reinforcement, and I never listened to anyone who tried to convince me that such a dog needs punishment sometimes. we teach him that humans are in charge, by BELIEVING that first: he knows by reading our energy and our intentions that when we say something, we MEAN IT. If we hesitate he is ready to take advantage of that, and make fun of us !! Because of this great ability to read deep into you, and the capacity to take his own decisions independently from you,  owning a ridgeback is a big challenge, you must always be in charge, never let him believe he can get your place in the pack. or you will have a lot of troubles ….

A young ridgeback can be very stubborn, but if you make clear from the beginning that you mean what you say (by acting as calm assertive source of energy) he will respect you forever !

Berry did not make things so difficult for us, I must recognize that. Yes, he was  a little bit too much exuberant and also sometimes stubborn trough his adolescence phase, but we never lost our nerves. I know he is very special: sometimes when he looks into my eyes, I cannot believe he’s “just” a dog, because his expression is so intense, that I feel he really “understands” me. I guess it is because we all love him so much, and he loves us back, offering us every single day true friendship, loyalty and complete devotion !! 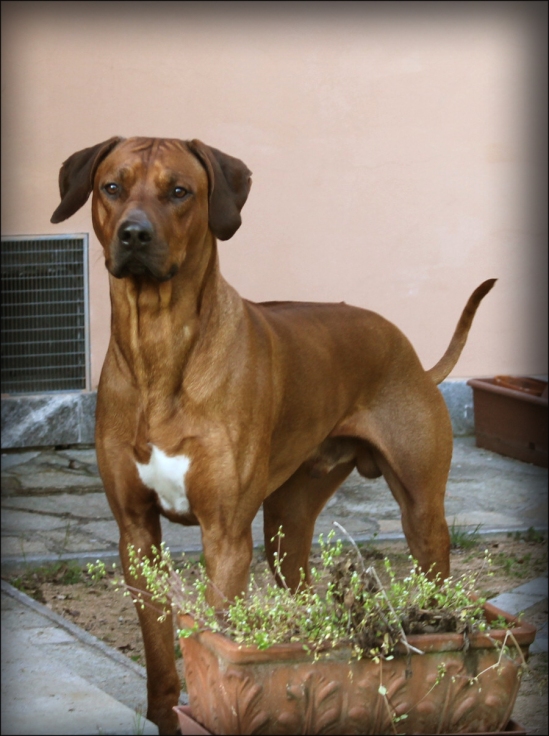 3 responses to “ABOUT Berry Neomele”