I am extremely proud to announce you that out boy Berry wile sire an exclusive litter in Germany. The parents of this beautiful Mch.female are well known representative of the breed, her father Mch Red Wheaten Akani is World Winner 2012, her mother Mch Sabayuma Bandari Jalia is Crufts winner 2014.

I want to share with you the story behind this mating…. it is a story of rivalty, but also showmanship, and first of all a story of friendship….. The foundation dogs of our young kennel, Berry and Dakota were rivals in the showring against the foundation dogs of Akani’s clan kennel, Akani und Jalia, on a regular basis in the european scene for some years, being both males and females the same age, but the rivalty between us didn’t stop us from becoming good friends. We shared happy moment by ringside despite the fact that our dogs had to compete against each other. It could seem an obvious thing, but it is not. At the end of the day we always congratulated to the winners and mutual respect was real. It was very easy for me to agree to this mating, knowing the qualty of their dogs, but I cannot hide my pride and happyness since this mating is the final proof that we want to work together for a better future of the breed. Thank you Simone und Andreas for your trust, thank you for your friendship, now let’s hope for a lovely healthy bunch of puppies ! 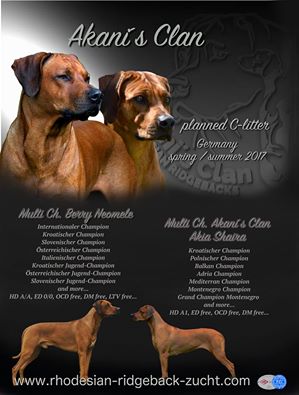