We are back from a wonderful week end in Klagenfurt, but more important, we are back in the showring !!

We entered the international show in Klagenfurt with Berry and Dakota. Berry is already austrian champion, and came just to support his life companion Dakota,  she needed to close the austrian championship, but we could never dream of her results, short after long long nursing of 13 puppies !!!! It was her first time in the showring after a long break of 9 months, and having still some loose skin under her belly, I was concerned that she would not achieve the necessary score, but I forgot that she is a show queen, and when she enters the ring, she shines like a diamond, she feels so good and she enjoys every moment of the competition,  you can see it from her big winning smile on her face, oh yes, she took it all !!!!

This is the result:

-Day 2. under judge Antonio di Lorenzo (N) who by the way did not allow baiting in the ring, she won again, rated exc. 1 place, with CACA, CACIB, best female and BOS !!! She became NEW AUSTRIAN CHAMPION !!!

Berry is still a little bit out of condition, the day 1. he was 2. with excellent and res. CACA in champion class, with a very nice report, the judge appreciated his powerful movements, but also wish him to be a little less heavy, the second day he was 3. with VG also with a very nice report, just the judge think he is too big… We really have to excercise more…. all of us (especially me…)

Anyway, the good news are not finished !!! Berrys son Milele Yako Ashima Diego (litter Berry x Bushira) finally showed himself in the best light mastering the judge examination, so he won the junior class with excellent, also becoming best junior !!! We are superproud of him and of his owners, who loves him so much !

In Klagenfurt we had the chance to see our Miss Ocre, now Shujaa Rafiki Allstar Aurora, who is practising to become a little show princess, we will soon see her in the showring !!! Thank you Nina and Robert for taking such a good care of her, she looks gorgeous !!!!

We want to thank all our friends for the weekend together and for the support, we really had a nice time !!! 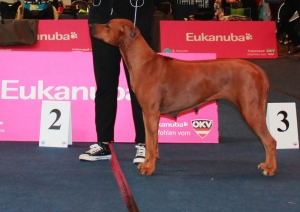 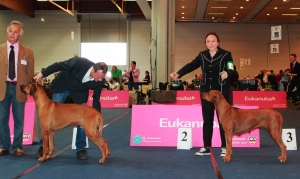 DAY 2.DAKOTA BEST FEMALE AND BEST OF OPPOSITE SEX 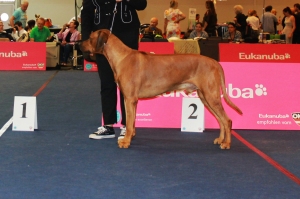